In this article, I make the argument that free child care has a net benefit over the long-term that outweighs the financial outlay of providing child care, and that current calculations are misleading about their benefits. This is a discussion of strategy as much as it is rights, where the aim is to maximise outcomes for women in terms of equality of income. I believe that a move to equal outcomes for women, particularly when it comes to the workplace, results in utility gains not only for the women who are affected but also for the other members of society. 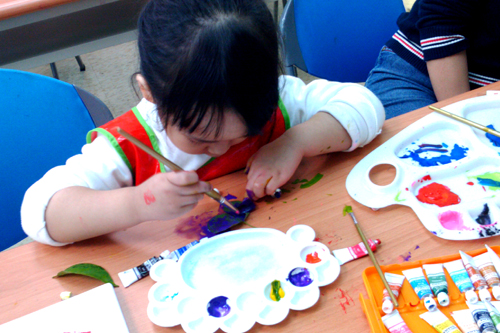 Child care should be the focus

In my opinion, child care is much more important to the rights of women than paid parental leave. In a strange twist of fate, a system that is financially very similar to the baby bonus is lauded as a win for equality while the old baby bonus was an attack on the rights of women. Aside [1]

In actual dollar terms, paid parental leave under the current system is 18-weeks at minimum wage, or $11538.90. This is a tiny sum when we consider the long-term cost of child care.

Those who care about the rights of women in the long-term should focus their attention on child care, even if this means putting less efforts into advocating paid parental leave. If much more ground is gained on child care and no change change occurs to PPL, the net financial outcome will be a huge win for women. Aside [2]

Why we need child care

Raising children is hard. I am very grateful to the families across Australia who raise good human beings to power our economy and make society a generally good place to be in. I like humans. I feel a little bit of guilt when I acknowledge that I don't pull my weight in that regard. I benefit greatly from the large sums of money, time and effort other adults put into raising the next generation. Having children is not a selfish activity, it is of great benefit to society.

It is this guilt that makes me try to think of ways that I can make amends, particularly to women who are disproportionately affected by raising children. They have much lower lifetime earnings, much smaller super funds and are unable to achieve the level career advancement expected because time spent outside the workforce decreases the total years of experience one has.

What is the long-term return on child care investment?

The early years of your working life is usually quite poorly paid. When we consider the income generated by a person early in their career (which coincides with when many raise children), the tax revenue returned is understandably very small.

It is not always the case, but the later years of your working life are typically the highest paying.

In 2010, people aged 20-24 earned, on average, $943 per week. Maximum average pay is reached at 35-44 in these statistics, however part of the effect of reducing incomes will be partly due to higher skilled younger generations. People over 55 are typically earning $1470 per week, and as such, we will assume that reduced time in the workforce reduces income by this amount in these calculations, even though they may be an underestimate.

The median age of women have children in Australia in 2013 is 30.8 years. This means that half of women who have children are at an age where their wages aren't very high, and that means that looking at the tax revenue return on a year by year basis misses most of the full benefit of increasing access to childcare.

Note on why I used earnings of *people* (men and women), rather than earnings of women in alone: the income rates of older women, in my opinion, are heavily impacted by time taken to care for those children. For people who are 20-24, the mean income of men is 13% higher. In the 45-54 years age group, men’s mean income is 31% higher. Means are used in the calculations because we care about the population average in terms of total earnings and total tax paid. All data can be found in “Full-time employees in main job, Weekly earnings in main job—By age group—By sex“

A 50 year old woman who earns $1470 per week would be much more able to pay for child care than a 25 year old woman on $943 per week, who would find it almost impossible. But by not providing child care to that woman, either at 50 or at 25, you do the same thing to her expected lifetime earnings: you reduce her lifetime earnings by $1470 for every week that she doesn't have access to child care. One additional week out of the work force sets experience and career advancement back by a week.

What will the woman do with all that extra money in her midlife? She will certainly spend some of it on non-'essential' items. More income means more consumption. The point about income inequality isn't that there are scores of women starving to death, its that women deserve similar levels of quality of life as men. Even given that this woman will directly consume some of this benefit, at the same time she will be able to pay off her mortgage sooner, she will have more money to voluntarily add to her retirement savings and her compulsory superannuation contributions will also be higher (which works out to 9% of $1470, or $132 extra in her super per week you give her childcare).

For every week an average woman has access to child care, she increases her lifetime income by $1470, increases her superannuation by $132 (and therefore reduces her pension dependence) and she advances her career by 1 week. I can't think of a better way to advance women’s rights than that.

The Child Care Benefit only subsidises child care at $200 for the first child per week. I argue that this is not enough, as there is a substantial difference between $200 and the costs of sending a child (or children) to child care for the entire week. The people who need child care the most are the ones who are least likely to be able to afford this disparity. The current system works as almost exclusively middle class welfare, as the poor cannot take advantage of it without negatively impacting their short-term finances.

I would like to see all low income mothers able to work and advance their career. This will increase the earnings potential of these women, reduce long-term unemployment and decrease costs on the welfare system, especially as they age.

Countries that have accessible child care range have much higher rates of maternal employment.

Denmark pays for 75% (and sometimes more) of the costs of childcare. Denmark has a maternal employment rate of 85%. Part of the way they achieve universal childcare is by allowing more children per child care worker.

The following proposals are not final policy, but I intend to make them formal following consultation with the party members (hopefully that’s you, if not, join here) and later the executive.

Infant care is quite a bit more expensive for obvious reasons. Some women want to make a return to the workforce earlier. I propose that the voucher value for preschoolers be equivalent to the voucher value for infants. This voucher will almost certainly not cover the full cost of care for these children, but will give women who want to return to work earlier a much greater opportunity to do so.

For children who are at school, I propose that school days have 2 hours of after/before school care (with the maximum care provided reduced by 5.5 hours per day) up to the age of 16. The Future Party also already has a proposal for an ‘Extension School”, which may be able to cover some of the costs of providing this child care.

The rate for child care will be estimated on a calculated minimum cost of providing child care on a regional basis. All parents will receive this benefit at the same rate (no means testing, and no increased subsidy for people who select more expensive child care).

To ensure that this is affordable, I believe that deregulation of the childcare industry needs to occur. There needs to be greater scope for child care to be provided by highly trained individuals in concert with people who achieve an agreed base standard of training, together with reasonable staff-to-child ratios. Trisha Jha goes into detail about why this should be a priority in this article.

Free or very accessible child care will not save money in the short term. It will increase income for women over a period of around 40 years due to lifetime impacts on earnings. Of course, this is not a plan that a party like the Liberals will implement, but it is one that a party like the Future Party will take seriously.

Aside [1] If we called maternity leave a "baby bonus" and told women to "have one child for mum, one for dad, and one for the country" people would be absolutely furious. On the other hand, we call it paid maternity leave and suddenly it is absolutely ok. You see the working and middle class left awkwardly accept that Tony Abbott is OK on this issue. It's a classic example of framing, and why we need to examine carefully the incentives and financial outcomes in any system that attempts to address injustice.

Aside [2] I am strongly against the newest proposal by the government that effectively taxes companies that give their own PPL at 100%. That said, if women don’t get the earlier government proposal of matching wages but do get accessible child care, it will still be a huge victory.