The worm has turned.

The Australian public is sick of empty promises, personality cults, and party politics over policies. Meanwhile, support for minor parties and independents is on the rise, hitting a record 17% in May 2016.

Polling from Roy Morgan also indicates that Australians' preferences for Labor vs. the Liberal/National Coalition are too close to call, and support for the Greens remained steady over the past 12 months. Australians are looking beyond the same old parties for someone to represent their interests.

A higher rate of enrolment on the electoral roll in the lead-up to the 2016 election, compared to 2013, suggests greater engagement with politics in general. 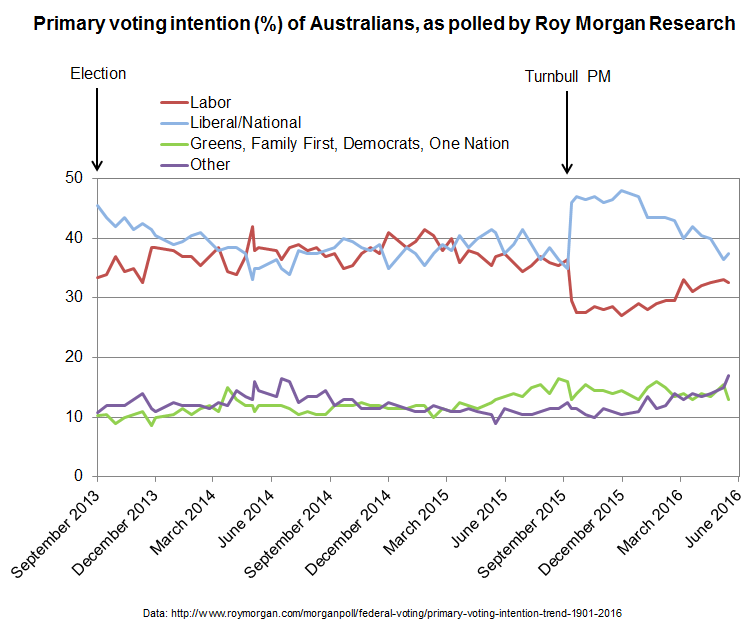 The government’s stakes were boosted following Malcolm Turnbull’s successful leadership challenge in September 2015. The move was welcomed by small ‘l’ liberals who agreed with Turnbull’s progressive stance on issues like marriage equality and climate action. But Coalition support steadily waned as the new PM began to toe the party line, adding to the litany of broken or unfulfilled promises of the Abbott government. On marriage equality, Turnbull now supports an expensive plebiscite, and the government has sacked CSIRO climate scientists while funding investigation into the health effects of wind turbines.

A detailed analysis by Roy Morgan showed that the Coalition is particularly unpopular with women and younger voters.

Meanwhile, the Greens have been struggling with growing pains. They sided with the Liberals to rush through senate voting changes that will disadvantage minor parties in a bid to maintain their position as the third force in Australian politics. They have also fallen prey to internal party politics, with infighting plaguing the NSW branch.

The winners in this situation are small parties and the Australians they represent. Minor parties are bound only by their principles; not by the interests of big business and lobby groups. Demand change in parliament and vote minor in 2016!