Dr Andrea Leong is the Leader of the Science Party.

Despite what you might have heard, "greenies" and their supposed opposition to hazard reduction burns are unlikely to be responsible for the intensity of the current bushfires.

Let's look at New South Wales as an example.

Australians accept poor air quality through autumn, winter and spring because we accept the importance of fuel reduction burns. The former NSW Office of Environment and Heritage (now disbanded) worked to understand the effect of hazard reduction burns on air quality. 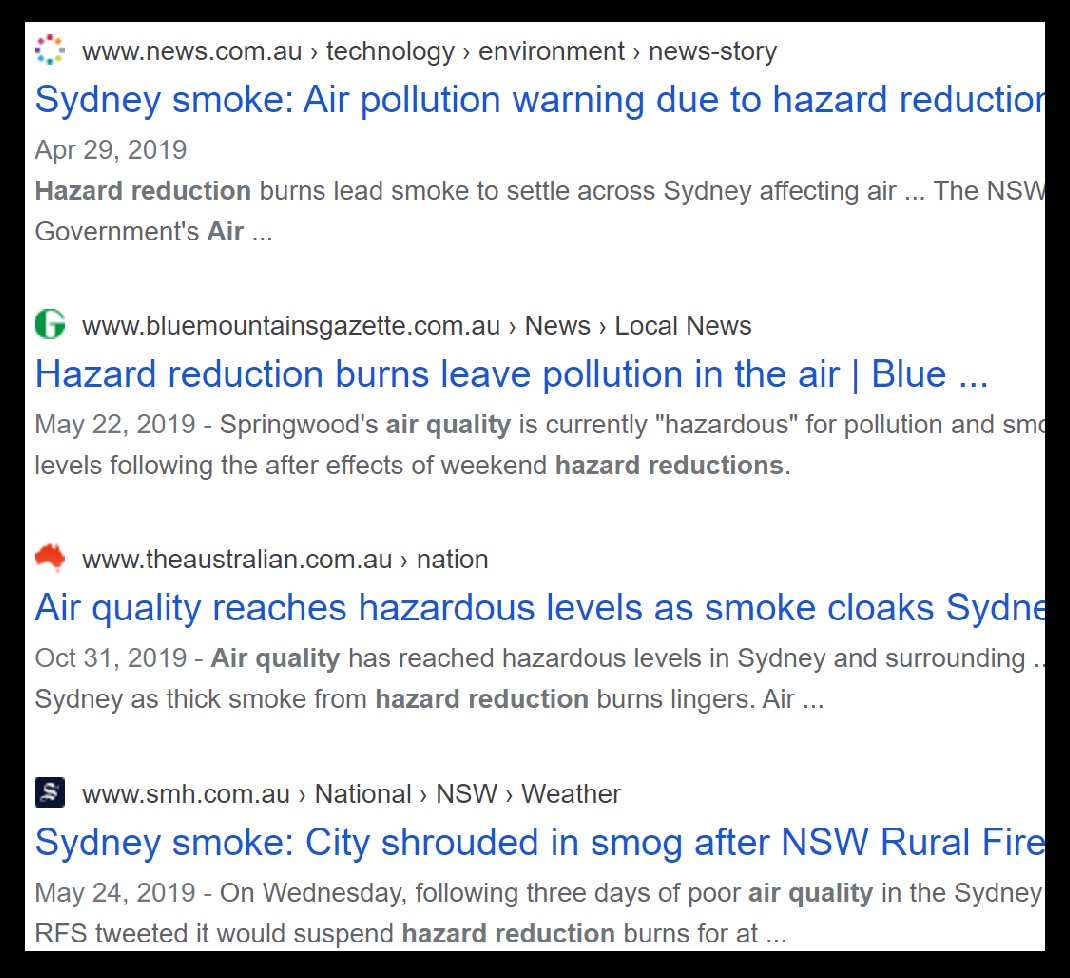 As our ever-lengthening bushfire season begins, we have in one corner the annual outcry that "green tape" prevents great swathes of necessary burns. In the other corner, Parks and Wildlife NSW makes the following claim, with numbers and things:

"Since the start of the [Enhanced Bushfire Management Program] in 2011: The National Parks and Wildlife Service (NPWS) has carried out hazard reduction burns covering more than 680,000 hectares on NSW parks and reserves. This is more than double the previous 5-year total."

(While this program accounts for 80% of all of NSW's controlled burns, presumably the NPWS is burning exclusively in parks and reserves. I acknowledge that the remaining 20% might be more important in protecting houses at the urban-bush interface.)

Despite the increase in hectares treated, tinderbox conditions mean we're still far from our targets for controlled burns. In September this year, the Sydney Morning Herald reported that relatively few houses had been protected. Burning had not occurred in some areas due to *checks notes* unfavourable weather. Greg Mullins, a former NSW Fire and Rescue Commissioner pointed out:

"it is often either too wet, or too dry and windy to burn safely. Blaming “greenies” for stopping these important measures is a familiar, populist, but basically untrue claim."

"While our hazard reduction works have been going ahead they have obviously been suspended while we are dealing with bushfires."

So there you have it — if you want more hazard reduction, volunteer to go out there and do it while the conditions are right, or demand more funding for fire services.

While hazard reduction helps in some contexts, it's not a universal fix, and more burning doesn't necessarily mean better protection from bushfires.

"most planned burning patches never encounter a bushfire during their effective lifetime. In any case, bushfire can burn even through one-year-old patches. Weather is the primary driver of fire behaviour. In catastrophic fire weather, recent burning has little effect on how a fire behaves."

We should use burning as a tool where it can be expected to provide protection, and always carefully consider the risks to human health and wildlife — the very things we are trying to preserve. Effectiveness is very dependent on location:

"In most bioregions, prescribed burning is likely to have very little effect on the subsequent extent of unplanned fire."

And while this final angle isn't often raised, it could come into play more often in the future, given our extended drought: hazard reduction burns could create bushfire fuel by drying out vegetation while reducing fuel load on the forest floor.

"While the majority of burns were quite effective in removing understorey fuels below 0.5 metres in height, in most cases shrubs above this height tended to be cured rather than consumed."

This bushfire season, those of us lucky enough to not be at immediate risk must keep up the pressure and demand that our government addresses climate change to stop escalating our future risk. The link between a warming planet and the severity and duration of each bushfire season is clear.