In this post, we investigate the impact of the proposed voting changes on splitting of preference flows which may lead to Coalition control of the Senate. This model was produced by James Jansson and submitted to the Joint Standing Committee on Electoral Matters on the 29th February 2016.

Many claims have been made about vote splitting and optional preferential voting. In particular the Greens and Antony Green have made assertions that a change in preferences will not result in a split of the left vote that will more likely advantage the coalition. These claims are made despite no modelling evidence supporting it. I have decided to create a relatively simple Excel model that shows the impact of vote splitting on a 3 horse race with optional preferential voting.

The model I produced has a particular format and a number of assumptions. Although this is not testing a full senate election, The results are indicative of what could happen under optional preferential voting above-the-line.

The model normally refers to the three parties in this race as Liberal, Labor and The Greens. The purpose of this is to make it familiar and hence easier to understand what is going on in the model. In particular, that there exists a larger party and the two smaller parties are overlapping in their demographic which could potentially split the vote. This model could easily have names switched to represent the opposite ideology represented in the large/small party positions.

The model inspects cases in which the Liberal Party has two senators elected before preference flows and the Greens and labour have 3 senators. It determines if the Greens and Labour were expected to get the final seat under the current preferencing system but instead the Liberal party gets that seat instead.

The model results show that an “upset” is possible at any level of incomplete above-the-line preferences. Interestingly, a failure to complete the preference rate of just 20% results in 10% of election results being “upsets”. 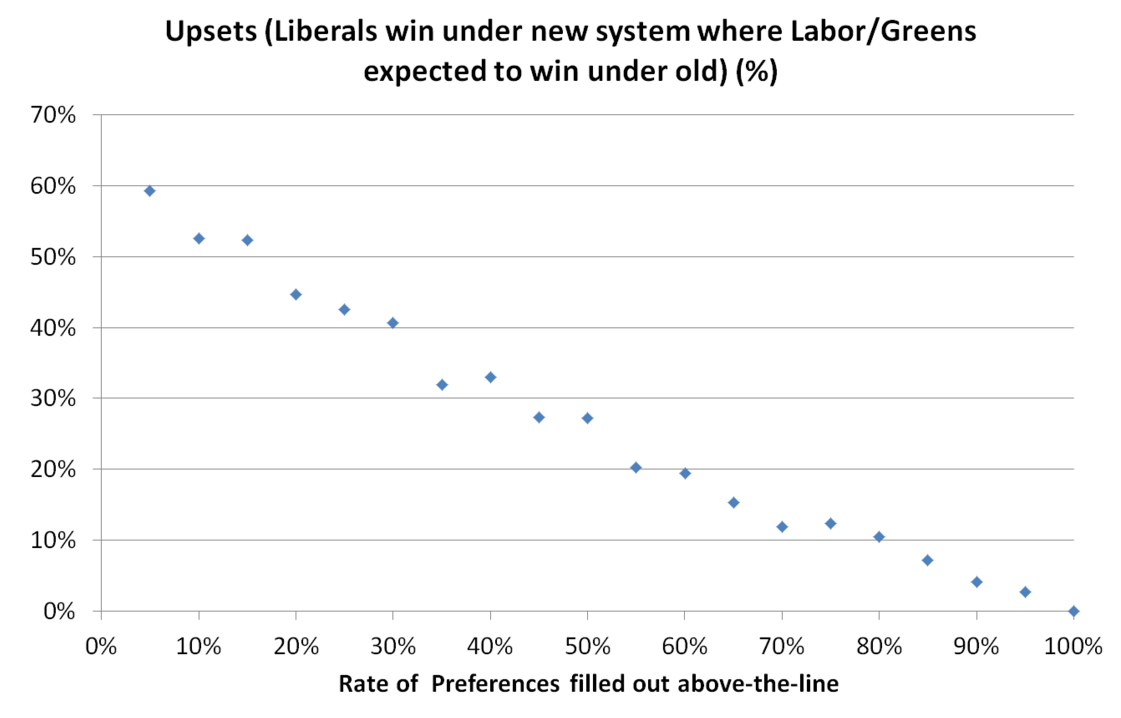 In fairness, it should be noted that in order for there to be an upset, the Liberal party vote needs to be approaching that of the minimum necessary to reach 3 senators on quota alone (42.85%).

However, this model underestimates the impact of vote exhaustion as it only considers 3 players. Given many more parties, even with most votes filled out formally but still exhausting at 6, the result could be much worse.

The implementation of an optional preferential vote above-the-line system can cause upsets at elections where smaller parties have overlapping demographics and hence split the vote.

If this system is implemented, a core way reduce the likelihood of a conservative controlled Senate is that those who have progressive tendencies should not run against the Labor Party. It is highly confusing why the Greens are choosing to go down this path.

The spreadsheet for this model (with less rows to reduce upload size) can be downloaded from here: