What they won’t tell you about interest rates.

Imagine a small town. Nicole makes a decent living selling nick-nacks from her shop, employing several people, supporting the local community. Most people in the town drop by once a month to buy a little something with the money left over from that month's expenses. Soon, Willy opens a widget store. He offers a pay-later option from the bank, which means the townsfolk can not only get themselves a nick-nack from Nicole, but also buy widgets for their friends. The town is booming. Willy's low-interest buy-later option means town-wide sales are double what they used to be. Everyone is happy that they can enjoy their products in a thriving economy.

After some time, the bank starts asking Willy's customers to pay their debts. They won’t be able to buy any more widgets until they repay what is owed, so his sales drop substantially. He has to fire his workers due to the lack of demand, and the local economic situation degrades. Willy’s enterprise hasn't succeeded.

When Nicole hears the news, she is in for a surprise. Not only do the customers have to stop buying widgets from Willy, they have to pay back the money they owed him, and the only way they can afford to do that is to cut back on nick-nacks! Now two businesses have been destroyed, and the economy is in free-fall. Nicole rues the day that the banks gave out so much debt.

What’s that got to do with my savings?

The situation in Australia is not dissimilar from this town. Household debt is among the highest in the world, and it may not be sustainable to continue lending money to people that have already maxed out their credit cards. 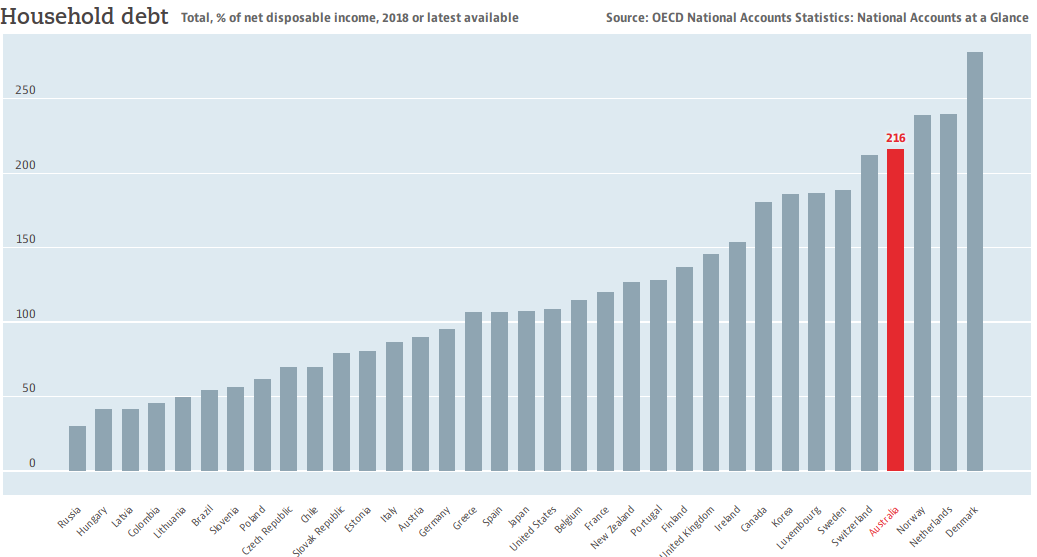 The standard remedy for a failing economy has been for the central bank (Reserve Bank of Australia, RBA) to reduce interest rates. The intention is to encourage more and more people to borrow more and more money to spend in the economy. It should be clear though that this is the very type of monetary policy that got us into the situation in the first place. And as interest rates approach zero people are borrowing outside of their capacity, some with no possibility of repaying.1

If the economy worsens as loans are repaid, many more will lose their capacity to repay, and the country will enter a debt crisis.

Our central bank has dug itself a hole, and is now hitting rock bottom. Now it seems like it’s looking for a bigger shovel.

The town needs a way for people to pay back what they owe, but still somehow continue to buy the things they want. They just need a little more money to do so. One way for this debt to get repaid would be for everyone to get a pay raise, but the RBA will likely take a different approach: What if they just make ~everything~ more expensive?

No politician would campaign on a guaranteed rise in the cost of living. With many households struggling to get by as is, such a policy would be absurd. The RBA however would like prices to increase by at least 2% every year, and are actively working to achieve this.2

Put another way, the buying power of a $100 note may be 2% less next year, and that hundred thousand saved for a house deposit will also lose 2% of its value. Every year…

This ‘inflation’ is actually a tax on savings. An unseen tax progressively whittling away at money not spent, a tax that increases the more you try to save. At some point, it diminishes savings at the same rate they are accumulated, putting a ceiling on the wealth that can be accumulated by saving.

With official interest rates near zero, the RBA’s standard lever for creating inflation is running out of efficacy, so the central bank is now toying with other mechanisms: introducing quantitative easing (vast money printing), and weakening the dollar to increase the price of imports, in order to reduce the value of our cash.3

This sets up a moral hazard, where prudent investors are taxed to pay for the risks of speculators, by literally making our dollars worth less.

This also creates a feedback loop, continually increasing inequality. The more indebted you are, the more wealth you can amass from this system; and the amount of debt you can take on is usually determined by your current wealth.

The poor’s savings are taxed away, and the rich’s debts are wiped clear.

Capitalism is often described as the source of the world's inequality, but the situation described here is not a true free market. When governments and their agencies guarantee an outcome, they create moral hazards. In a freer market, investors could recognise the risk of lending to poor borrowers, and demand higher interest rates to compensate, evening the playing field. But the RBA is holding interest rates and the Australian Dollar artificially low, punishing prudent savers, and allowing speculators to gamble with the entire economy.

We often hear about people getting on the property ladder, but it’s actually more like a pair of escalators. If you’ve been granted a huge loan you may get a free ride up, but if you’re busy saving, you’re on the side going down.