With approval for Adani’s Carmichael mine imminent, and a surge in support for renewable alternatives, a simple hypothetical arises:

What if the Adani mine site were covered with solar panels instead of holes?

To be clear, digging holes is part of Australian life1, and the special dirt that comes out can help keep our nation prosperous, but while some types of this dirt will remain important into the future2, some may contribute to catastrophe.3 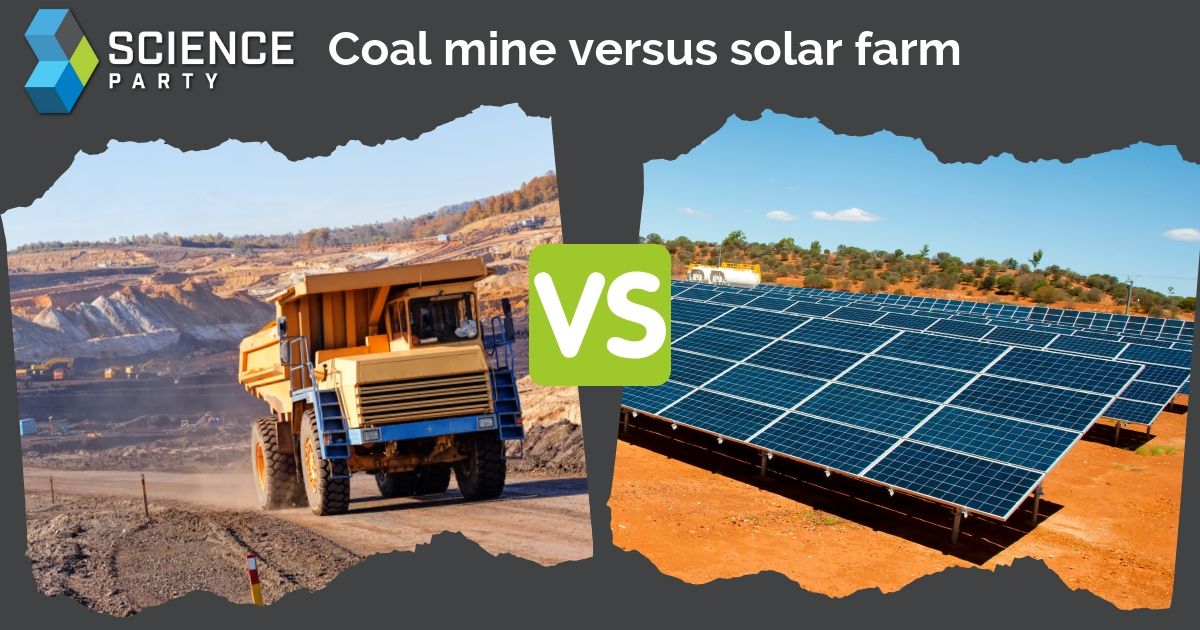 At a visit to local solar company 5B, we discussed the outcomes of creating the world's largest solar farm on the Carmichael site instead of extracting coal. In our scenario, the 46,000 hectares of Adani mine is instead covered with a rapid deployment solar installation, and evaluated in terms of the net energy, economic viability, and employment potential.

The mine is expected to produce an average of 38 million tonnes of coal per year.4 Using the widely-cited estimate of 2.46MWh of electricity per tonne of coal amounts to around 94TWh per year of potential electricity production.

Utilising the same area with a dense installation of solar panels such as 5B’s solution could produce up to 1.5MW per hectare, 70GW, for a total of 120TWh per year once efficiencies and local environmental conditions are accounted for.

A solar installation could produce comparable, and potentially greater net energy output than the proposed mine [120 vs 100 TWh], just by utilising the land area.

It has been widely reported that the numbers on the Adani coal mine don’t add up,5 and that the project is likely to lose money over its lifetime.6

While a solar farm of this magnitude would not be cheap, it would carry earning potential far greater than that of a coal mine. At around $0.7million per MW,7 the installation of such a system would carry a price-tag of around $50billion. Additional grid infrastructure would also be required to cope with the power, however solar farms now carry one of the lowest costs of generation of any source,8 and once established the project could be expected to generate a 6-8%ROI,9 paying for itself in less than 15 years.

When viewed as an investment in infrastructure to provide cheap and reliable electricity to Australian industry, a project that pays for itself is a sure winner over a loss-making malinvestment.

An estimated 1,500 jobs10 at Adani’s mine seem to have been the motivation for fast-tracking its approval in the lead-up to the federal election. However, with modern mine automation minimising the need for workers on the ground, and a commitment from Adani CEO Jeyakumar Janakaraj to automate the project “from mine to port”,11 this estimate might be inaccurate.12

Alternatively, for the scale of solar production and deployment suggested, 45,000,000 hours of full-time work would be required; that’s an average of 1,200 full time jobs over the full 25-year project life.

In addition to the superior jobs numbers for the project, the development of a large domestic solar industry and accompanying energy-intensive businesses will provide many more employment opportunities into the future.

As a single project, a 70GW solar farm would be tens of times larger than the next competitor,13 it would utilise a large percentage of the annual production of solar modules, and provide enough energy for over half of Australia’s current demand.

Although building the world’s largest solar farm on the Carmichael mine’s location may not be practical, our assessment demonstrates how ill-conceived the Adani project is, even without accounting for the environmental damage that is sure to result. Projects such as a 10GW solar farm in the NT are being planned by forward-looking governments and investors, who can see the potential for growth, returns and environmental sustainability that renewables provide.14

Australia should be a global superpower in sustainable energy. The Science Party’s target of 800% renewables could be achieved with only a dozen similar epic-scale projects, but our leaders must first start making decisions to invest in the infrastructure, technologies, and jobs of the future.

Note: The Science Party would like to thank 5B for running the numbers on our hypothetical. If you have any “What if’s” related to Science Party policy that you’d like us to look into, let us know at [email protected], Facebook or Twitter.